The settlement of Jean Marie River is situated at the confluence of the Jean Marie and Mackenzie Rivers, at approximately 61° 31’ North latitude and 120° 38’ West longitude. It is 127 kilometers east of Fort Simpson and about 360 kilometers west of Hay River. It is located in the Great Slave Plain eco-region, which consists of low rolling marsh lands and willows; and dense spruce, pine, and poplar forests.

Traditionally, the Tthets’éhk’e Délî got’ine (the people who traditionally occupied the Jean Marie River area) lived and traveled over a very wide area within what is now called the Dehcho region of the Northwest Territories. For countless generations, people pursued a traditional lifestyle: hunting, fishing, trapping, and gathering plants and craft materials; moving with the seasons and resources throughout our traditional territory. The Tthets’éhk’e Délî got’ine had major family camps along the Mackenzie River from Mills Lake to Fort Simpson, in the Horn Plateau, at McGill Lake, at a traditional area called Selero, and at the ‘three lakes’: Ekali Lake, Sanguez Lake, and Gargan Lake. No camps were permanent and people moved according to the seasons, often returning to the same general areas year after year.

In the early 1920s, the transition from a nomadic lifestyle to living in a more permanent settlement began on the recommendation of the Elder Norwegian. He recommended people settle at the mouth of the Jean Marie River (Tthets’éhk’e Délî), a traditional gathering and fishing spot. A permanent settlement slowly grew over the years, but people still pursued a traditional lifestyle for decades, traveling out from the settlement on a seasonal basis to camps spread out over our traditional territory. Some families remained at outlying lakes for years, only traveling into Jean Marie River and Fort Simpson for special occasions and supplies.

The JMRFN began as an independent band under the Indian Act in 1992. Prior to that, it was considered a sub-band of the Fort Simpson’s Líídlii Kue First Nation, even though it has been functioning as an independent settlement for over 80 years.

By the 1950s, the settlement of Jean Marie River had begun to develop a non-traditional economy based around river transportation and logging. Collectively, the community members bought and operated a small tug boat for fishing trips, hauling firewood, installing channel buoys and hauling fuel (operating from the 1950s to 1980s); and a portable sawmill to produce lumber for local use and for export to other communities along the Mackenzie River. A sawmill is still in operation today. They also managed a community garden, producing cabbages, carrots, and even tomatoes for local consumption. This garden is no longer being planted.

These economic activities complemented the traditional economy and provided a balance between a subsistence and entrepreneurial/wage economy for many years. Today we are looking toward building greater economic sustainability through the development of greater self-sufficiency, a goal that climate change challenges, but also provides some new opportunities for sustainable economic and community development.

Project Summary – How we are Leading the Way

From the results of this project, the JMRFN is more aware of the far ranging impacts of a changing climate on different aspects of health.  In comparison to other Aboriginal communities above the tree line in northern Canada, Jean Marie River First Nation has not been as severely impacted by climate change. However, from the changes our people are observing and experiencing many of these changes can be directly or indirectly linked with climate change. By conducting this project our community has taken the first step towards a proactive approach to identifying current and potential impacts associated with climate change, as well as thinking about how to respond to these impacts before they become too severe.

Furthermore, by exploring initial ideas for adaptation strategies our community can prioritize where the community is most vulnerable, how severe impacts are (or will be), and the ability for our community to adapt to reduce our vulnerability, and increase our resiliency, to climate change.

Through community meetings, workshops, and presentations at the JMR School awareness of climate change as both a global and local issue was raised. The information disseminated came from a combination of scientific knowledge and from traditional knowledge shared by Elders and land users. Scientific knowledge helped frame the issue of climate change as something that is happening, and is especially noticeable in the North, and that this issue is having and will have serious impacts on peoples and ecosystems. The people of JMR have been noticing changes in the climate for decades and the traditional knowledge shared about how weather changes, and how these changes affect the land and people, provided valuable information about how things are changing locally that are associated with a changing climate.  Traditional knowledge was also shared regarding how to respond to climate change, such as looking back at how past community members utilized their traditional and local knowledge to make JMR a sustainable community. Traditional knowledge is also essential for guiding and implementing adaptation strategies.

The JMRFN has a baseline study to use as a platform to address and respond to climate change impacts that provides direction and concrete recommendations for our community. From this baseline study several possible next steps were identified by community members to address and take action to prevent and/or minimize the negative impacts of climate change. However, when we begin to develop and implement climate change adaptation strategies; we do not want to develop and implement these strategies as separate projects or initiatives, nor do we want short term solutions to a long term issue. The JMRFN needs to go beyond just developing and implementing adaptation strategies; our community needs to move towards adaptive management.

The JMRFN is moving forward with developing and implementing adaptation strategies identified from this project as knowing more about how the climate is changing and is impacting the environment and our community, will allow us to better prepare and respond to these impacts. 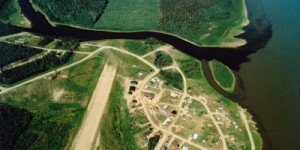