The Inuit Knowledge and Climate Change (IKCC) project is a collaboration between Zacharias Kunuk and Isuma Productions (acclaimed Inuit filmmakers of Atanarjuat The Fast Runner), Nunavut Independent Television (NITV), Dr. Ian Mauro (an environmental and social scientist, Mount Allison University) and communities across Nunavut. In the spring of 2009, Kunuk, Mauro and their crew conducted 63 climate change interviews with Inuit Elders, hunters, women and youth in Pangnirtung (n =24), Igloolik (n=15), Resolute Bay (n=10) and Iqaluit (n=6) as well as with climate change scientists (n=6) and other experts (n=2). In each location, the IKCC team conducted extensive community consultations, seeking input and guidance from hamlet and youth councils as well as the local hunter and trapper organizations, and travel “on the land” with local people to document climate change. This approach ensured that outcomes were community-based and increased the legitimacy and impact of the overall project and associated film.

Numerous Elders, geographically distributed across Nunavut, observed that the positions of the sun, moon, and stars had shifted and concluded that the “earth had tilted”. The IKCC team considered these observations seriously and interviewed scientists to see if scientific evidence existed on this topic. Waldermar Lehn, an expert in atmospheric refraction indicated that climate change is likely warming the upper atmosphere and this air is colliding with cold surface temperatures to create an “inversion” ideal for refraction. According to Lehn, when these inversions occur they can bend light, similar to a prism, and this can change the position of the sun, moon and stars, especially near the surface of the earth. Indeed, Elders’ observations of a “tilted earth” are likely evidence of a warming world, which is altering the “visual landscape” of the Arctic. Peer reviewed publications on this topic are forthcoming.

The overall goal of the project was to develop multi-media research and education tools that promote Inuit knowledge and climate change in collaboration with Nunavut based communities. Multimedia research tools were developed that explored the following topics:

The final outcome of the project is the feature-length film Qapirangajuq: Inuit Knowledge and Climate Change (www.isuma.tv/ikcc), which is the world’s first Inuktitut language feature film on climate change, and the associated project website. Content is continually uploaded to our website and Isuma plans to expand it as a tool to explore topics in the film.

A major focus of this project related to climate change and associated health issues. The IKCC team interviewed Elders and hunters, scientists, as well as community public health nurses about the health-related aspects of climate change.

The IKCC project, conducted entirely in Inuktitut, and using video technology to record Inuit knowledge is a model for how to respectfully carry out research in indigenous communities. Elders and hunters immediately recognized the importance of the video-based approach, given that it visually credited them with the knowledge being shared, but also allowed for widespread communication of this information. Participants in this project felt respected and trusted the IKCC team, given that it was largely comprised of fellow Inuit. Arguably, the strength of the IKCC approach was based on partnerships between academic and community-based researchers and the insightful participants they interacted with. This allowed for a co-production of knowledge, between the research team and communities, and ensured that Inuit were involved in decision-making regarding the project and its outcomes throughout. 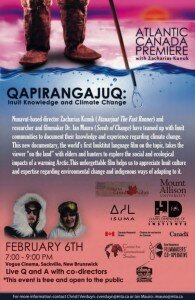 The film continues to be screened around the world. Notable screenings include:

Kunuk and Mauro will be taking the film on a tour of Atlantic Canada in February, 2012. They will also be presenting the outcomes of the film at the International Polar Year (IPY) 2012 conference in Montreal, April 22-27, 2012. 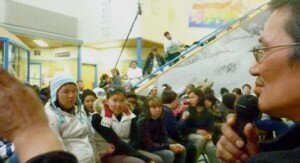