Warmer weather affects the food chain, also the snow that turns into ice and freezes…that gives animals a hard time to get their food underneath the hardened snow.- Inuvik Elder

This federally-funded climate oriented project was a youth-driven, community-based project that complemented the 2006-07 Dietary Pilot Project, which was designed to engage Aklavik youth in examining dietary choices and diet-diseases relationships at the community level. The community of Aklavik was engaged in the Climate Change project from many aspects — the Aklavik Health Committee guided the project and community members concerned about community health issues and staff and students of Moose Kerr School were involved through specific curriculum, the on-the-land retreat, as well as the video production. Elders of Aklavik and surrounding area participated by sharing traditional knowledge and applying past events to current understanding and adaptations to climate change. The research was integrated into the science curriculum at the high school.

The project was conducted in three phases. The first encompassed the collection of information related to climate change and health determinants as well as an on-the-land retreat to collect information. The second phase included synthesis of the information with video methodologies. The third phase included dissemination of findings. 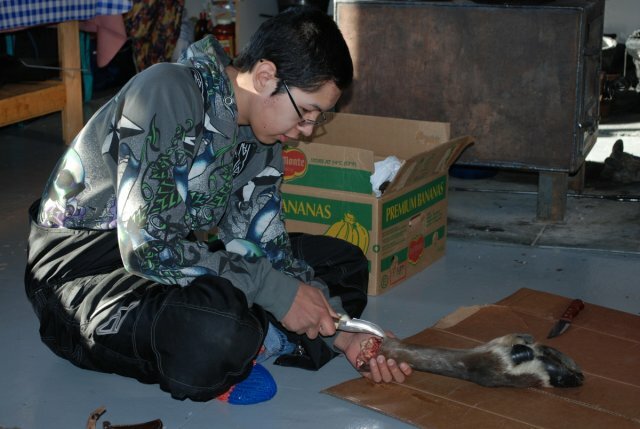 A major outcome of the project was a heightened awareness of the research process within the community and region. The project brought together the Elders and youth, and connected western science through the science curriculum and the traditional knowledge of the Inuvialuit and Gwich’in region. The information has been synthesized and discussed on several levels within the classroom. A thirty minute video was produced and premiered in Aklavik on Aboriginal Day (June 21, 2009).